Set in everyday humdrum reality, the play by Ivor Martinić which has been staged by the National Theatres in Zagreb, Ljubljana and Belgrade, is telling the story of thoroughly ordinary lives where the characters have forgotten why they even exist. Mirjana, her neighbours, her daughter, her lovers and her friends are trapped in meaningless lives with no apparent future. “Life is a cup of coffee” says Mirjana, struggling to explain her existence. Told in an almost tragicomic tone, A Play About Mirjana And Those Around Her is the story of triviality and how it shapes our lives. 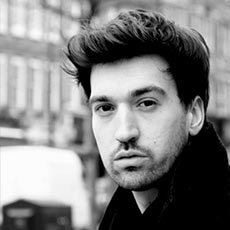 Award-winning Croatian playwright Ivor Martinić studied at the Academy of Dramatic Art (Department of Dramaturgy) in Zagreb.
His play The title of the drama about Ante is Written here  was produced by City Theatre (Split), Blue Elephant Theatre (London) and Theatre des Chardons (Bruxelles). His play Play about Mirjana and those around her was produced by The Yugoslav Drama Theatre (Belgrade), National Theatre (Zagreb) and City Theatre (Ljubljana).
His last play My son only walks a little slower was produced by Zagreb Youth Theatre. The production of this play won over 20 awards including Golden Laurel Award for Best play at MESS Festival in Sarajevo and Croatian Associaton of Dramatic artist Award for Best play.
His work has been translated into 13 languages and some of the translations have been published. 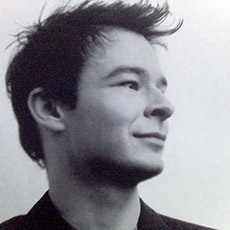 Gary Wright was originally trained as a dancer and has worked with many international companies.
His recent directing work includes:
Theatre: A Christmas Carol (Drill Hall), Dick Whittington – Another Dick in City Hall (Kings Head), Life’s a Gas & Not Going Down (Kings Head), Carnival of the Animals (Taplow Festival), Gay School Musical (Kings Head), The Random Acts of Strangers (Courtyard & Etcetera Theatres). He was involved in the development of a new play Maid of Bankside in conjunction with playwright Anthony Bull and the Globe Theatre. He is currently working on a one man show Hunter (opens in Glasgow in May 2013).
Film: Solitary, Muses, Mine.
Gary is an associate director for BaDaS Theatre Company and guest director for Bedlam Theatre Company. He was delighted to be asked to be associate director for Honey-tongued Theatre Productions.

Zoë’s TV credits include Silent Witness (BBC), Elegant Universe (Ch4) and Worried Sick (Ch4) and most recently Helpless (Blink Productions), a hard-hitting campaign for St Johns Ambulance, which aired nationally in the UK.  Film credits include The Diary of Tommy Crisp, winner of the Best Comedy Film Award at the New York Downtown Film Festival 2011 and selected for the LA Comedy Shorts Film Festival 2009; Subterranean Blue (Wodum Films) and American Civil War costume drama The Dress (Rockfield Pictures).  Recent theatre work includes the role of a grieving mother in The Random Acts of Strangers (Courtyard Theatre), Playboy Bunny-Girl Jemma in Not Going Down (Kings Head Theatre) both by Anthony Bull, and Teresa in Shelagh Stephenson’s award-winning comedy The Memory of Water.  Other roles on the London Fringe include doomed queen Elisabetta in Ugo Betti’s The Queen and the Rebels and novice nun Mary in Like When You Spin by Caroline Ross. 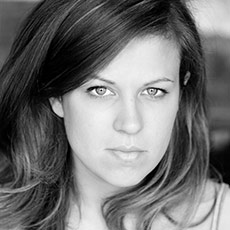 Since graduating from Drama Centre in September 2011, Neusha has been involved in projects including the prestigious 24hr Plays at the Old Vic and a variety of new writing productions at the Old Vic Tunnels, The Tristan Bates Theatre, the Old Red Lion Theatre Pub and the New Diorama. In July 2012, she performed in an exciting piece of immersive “live art” theatre at the Theatre Royal Stratford East, which was theatre critic, Lyn Gardiner’s, “top pick”. Other theatre credits include; Helen of Troy in The Women of Troy (The Blue Elephant Theatre), Mrs Linde in A Doll’s House (The Cockpit Theatre), Dol Common (The Riverhouse Barn) and Tina/ Edith/ Fanny in The Scapegoat (for “Late at the Tate” at Tate Britain and the Jewish Museum). Neusha won “light-weight” champion in the Triforce “MonologueSlam” at Rich Mix in 2012.

Janet has worked extensively in theatre and TV with forays into radio and film. Theatre since 2009 includes Eileen, They Have Oak Trees in North Carolina, Tristan Bates/503; The Old Woman, The Chairs, Ustinov Studio Bath; Irma, Random Acts of Kindness, Courtyard & Etcetera; Lady Brockhurst, The Boyfriend – 2011 ShowTime Challenge, Her Majesty’s; Old Dorothy in Last Family Standing, Radio 4 and La Signora in Napoli which opened at The West Yorkshire Playhouse last summer. Theatres played include The National, The Royal Exchange, The Traverse and the Almeida where she played such roles as Clover in Animal Farm; The Widow in All’s Well and Kathie in Kathie and the Hippopotamus; she also created Mum & Sphinx for Berkoff’s Greek. Other roles include Margaret in Richard 111; Mephistopheles in Dr Faustus and Filumena in Filumena and Volumnia in Brecht’s Coriolanus.  Recent TV includes Spooks, Casualty, Doctors, The Bill, Hotel Babylon, and Margaret Wilson in EastEnders. Her play Peril at St Agatha’s was performed at the Soho Poly and Croydon Warehouse in ’78. Over the years she has taught at Drama Centre, Arts Ed Drama, Alra, E.15, Birkbeck, and currently for the Giles Foreman Centre for Acting. 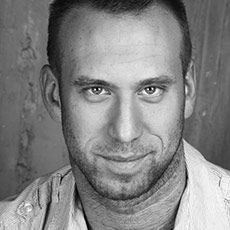 Dan has been acting since the age of 14, starting at the Alhambra Academy of Dance and Drama. Since then he has been fortunate enough to work in all areas of the industry including plays, musicals, pantomimes, concerts, commercials, radio, corporate, film and television. Theatre credits include Romeo in Romeo and Juliet (tour), Oberon in A Midsummer Night’s Dream (tour), Macduff in Macbeth (tour), Oliver De Boys in As You Like It (tour), Farmer Gammon in Wild Oats (Upstairs at the Gatehouse), Mean in Foreskin’s Lament‘(Plesance, Edinburgh Festival), Toad, Chief Weasel & Mole in The Wind in the Willows (various productions/tours), Rodolpho in A View from the Bridge (Charles Cryer Theatre), Witwoud in The Way of the World (The Bridewell) and many more. Film credits include; Features: Green Street Hooligans: Underground, Harrigan, Candle to Water, Lord of the Rings – Born of Hope, Charlene, Consequences, TV: Blue Peter (BBC), Seconds From Disaster – Black Hawk Down (National Geographic), Short films: The Hunt for Gollum, Scarred, Relentless, Detention, School Run, A Soldier’s Story, Knut Smith (mocumentary), Esoterica-Trust No-one (music video), Corruption (music video), Ace Face (music video), Charge (music video), Police Cuts (Viral), Brutish Airways (Viral). Commercials: McDonalds, BBC Tudors Kit Kat, Cancer Research, Ask Jeeves. Dan specializes in many styles of combat and is an experienced fight performer, teacher and choreographer of a wide variety of armed and unarmed combat (modern and historical). Dan teaches at drama schools and workshops around London and has choreographed fights on over 100 productions for stage and screen. Dan also his own production company – Freestyle Productions – for which he has now produced 1 feature and 6 short films. 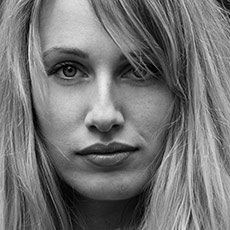 Award winning Croatian actress. Graduated from Academy of Dramatic Arts in Zagreb. Has worked as a lead in major theaters across Croatia including Croatian National Theaters Rijeka, CNT Zadar, CNT Varazdin, Zagreb Youth Theatre etc. She has extensive experience in theatre, TV and film. Most recent work in UK include feature film AB Negative alongside Vincent Regan and Roger Ashton Griffiths. The film is due Spring/Summer 2013. In 2013 she has been awarded with “International Actress of the Month” award by BFA (British Filmmakers Alliance). Other nominations and awards include: prize for Best Young Actress for the role of She in Dead End at the 14th Actor’s Festival in Vukovar,Croatia; Jury prize for Best Female Actress for the role of Klara in the play Fever at the 5th International Festival of Chamber Theater Leone D’Oro, Croatia; Nominated for Best Young Actress at Croatian National Theatre Awards for the role of Josie in Iron;  Nominated for Best Young Actress at Croatian Theatre Awards in the play FSK 16;  Nominated for Večernjakova ruža for Best actress in the sit-com Boomerang. Currently producing and acting in theatre show 12/2 in Zagreb, Croatia. She is also in preproduction of a feature film project in London, UK . 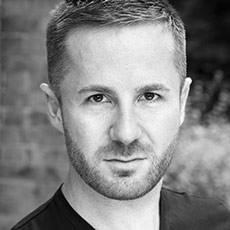 Training: East 15 Acting School and Drama Centre. Filip was born in Croatia. After graduating at the University of Zagreb, he collaborated with various Croatian theatres including Theatre EXIT in Zagreb for which he translated several plays into Croatian including The Complete Works of William Shakespeare – Abridged for which he was also assistant director. Theatre credits: Herr Eberkopf/Slick Casino in Peer Gynt – Recharged (Riverside Studios); Sir Benjamin Backbite in The School for Scandal (The Bridewell Theatre); Deputy to Menelaus in Orestes: Re-Examined (Southwark Playhouse): Narrator/ Umanosuke/Fudeo in Hanjo & Hell Screen (Oval House Theatre); Faulkland in The Rivals (Camden People’s Theatre); Edward IV in Richard III and Brocklehurst/Lord Ingram/Pilot in Jane Eyre (Brockley Jack Theatre), Duncan in Macbeth (The Tabard Theatre), Sir Pen in Peer Gynt and Edward de Vere in Shakespeare Inc. (Rosemary Branch Theatre), and Zhorro in Baaahhh! (Pleasance Theatre). 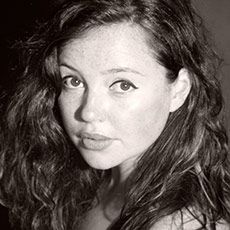 Rudi’s most recent theatre work includes TS Elliot’s Murder in the Cathedral where she played the Temptress and a member of the chorus in a sell out run on the London Fringe (Putney Arts Theatre).  Before that she played the role of Catherine in Shelagh Stephenson’s award-winning comedy The Memory of Water (Hen and Chickens). Other roles on the London Fringe include Marie in The King and Me by Hanif Kureishi (Baron’s Court Theatre), Melanie-Jane in Smelling a Rat by Mike Leigh (The Union) and Cecily in a play of the same name by Gillian Plowman.  TV credits have included Wonderwoman for the BBC Proms trailer. 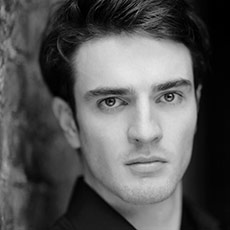 Patrick graduated from Durham University with a degree in English Literature, and then went on to study at Drama Centre London, graduating in September 2011.  Since then he has appeared in several short films, a documentary about the closed world of scientific research and many rehearsed readings.  Recent theatre includes James in Who the James is Jim Darke?, a new play set and performed in a real cafe in Angel, Devil and Rakitin in The Brothers Karamazov at the Lord Stanley, Adrien in A Woman of No Importance…Or Somewhat Little Importance Anyhow at the Hen and Chickens and Eadric in Silence at the Brockley Jack.

Ivor Martinic: A Play About Mirjana and Those Around Her